Early Pictures of Heather while in China waiting on us. 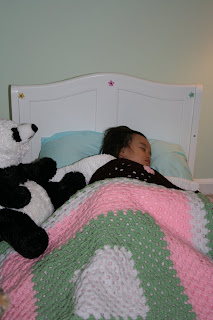 Heather was a very good girl during the entire flight home from China she slept most of the way. She then had her first experience with a car seat during the ride home. She became a bit restless but fortunately this only occurred within a few miles of our home. Tears were pouring out of her when we came into the house initially but after a short time with Mommy showing her around the house she settled down. We finally got her to bed around 2am and rested for just over an hour before waking up with tears and screaming. Mommy got up and played with her until 5 am at which time I relieved her until 10am allowing Karen to get some well deserved rest. I then took my turn to get some sleep from 10 to about 5pm and now the whole family is up and its about 3am on September 12th. I guess you might say our internal clocks are confused but Heather's schedule will adjust over the next few days (we hope) allowing us to resume our normal schedules. Thankfully I have three more weeks off before returning to work and Karen is off until mid-November. Here is a picture of Heather sleeping in her bed for the first time.
Posted by The Killackey Family at 11:42 PM

Labels: Finally home with our girl